The Delaware Court of Chancery recently dismissed Joseph Alfred’s Complaint against the Walt Disney Company for its breach of implied contract resulting from Disney’s refusal to negotiate with Mr. Alfred for a license to Disney’s T-65 X-wing fighter plane and thereby stalling the next evolution of human transportation.  The crux of Mr. Alfred’s complaint, if there is one, is that Disney varied from its standard policy not to accept unsolicited proposals, and in so doing created an expectation in Mr. Alfred that his proposal would be accepted. 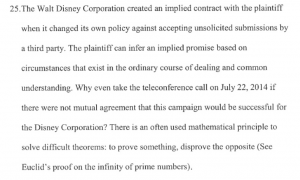 While such policies are often cited as being short sighted and stifling, they do in fact protect businesses from litigation, and a variance from such a policy invites trouble, as Mr. Alfred has proven.  Disney was able to get the suit dismissed in its early stages, but its doubtful that the Disney employees who participated in July 22, 2014, call had factored in the cost in both money and time, of taking the initiative with an unsolicited disclosure.