A pair of recent illustrate two important interrelated points about trade secret law: First, all trade secrets must be secret. Second, and less obvious, not all secrets are trade secrets.

In Hawg Tools, LLC v. Newsco International Energy Services, Inc., [2016COA176M] (Colo. App. December 1, 2016), the Colorado Court of Appeals reversed the trial court award of $1.3 million for misappropriation of trade secrets relating to sealed bearing packs for mud motors used in drilling, because “the evidence
did not prove that the design of the sealed bearing pack in question was a secret.”

As the Colorado Court of Appeals noted, the subject of a trade secret must be secret, and must not be of public knowledge or of a general knowledge in the trade or business.  While the jury found, at least implicitly, that the sealed bearing pack design was secret, the Court of Appeals review of the record revealed that no reasonable person would conclude that any evidence, or any reasonable inference arising therefrom, was presented on which the jury’s verdict against defendants could be sustained.

The Court found ample evidence to establish that the two desings were essentially the same, but it did not find sufficient evidence to distinguish plaintiff’s design its from other designs that were publicly available at the same time. In other words, the evidence in the record showed that the design of plaintiff’s sealed bearing pack was “of public knowledge or of a general knowledge” in the mud motor manufacturing business.

The $1.3 million verdict could not be sustained because the trade secret was not in fact a secret.

Part II of the less comes from the jury verdict in in Zenimax Media Inc. v. Oculus VR LLC, in the Northern District of Texas.  There, the jury rejected plaintiff’s trade secret misappropriation claims: 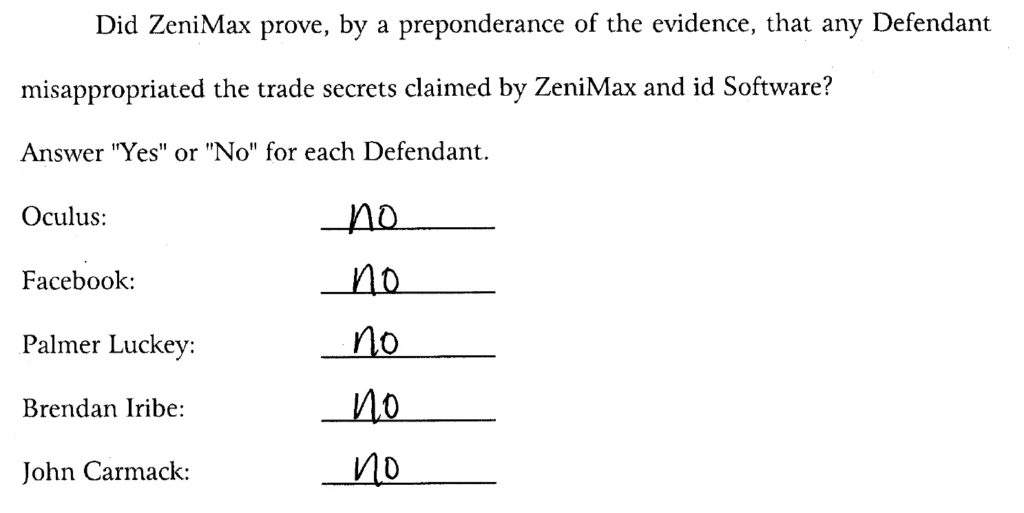 However, on the breach of the non-disclosure agreement, the jury found for plaintiff:

The jury found that Oculus as a successor to the agreement, and responsible for damages for its breach, and awarded $200,000,000.00 in damages:

United States Statutes purport to restrict the use made of the American flag.

No disrespect should be shown to the flag of the United States of America; the flag should not be dipped to any person or thing. Regimental colors, State flags, and organization or institutional flags are to be dipped as a mark of honor.

(a)   The flag should never be displayed with the union down, except as a signal of dire distress in instances of extreme danger to life or property.

(b)   The flag should never touch anything beneath it, such as the ground, the floor, water, or merchandise.

(c)   The flag should never be carried flat or horizontally, but always aloft and free.

(d)   The flag should never be used as wearing apparel, bedding, or drapery. It should never be festooned, drawn back, nor up, in folds, but always allowed to fall free. Bunting of blue, white, and red, always arranged with the blue above, the white in the middle, and the red below, should be used for covering a speaker’s desk, draping the front of the platform, and for decoration in general.

(e)   The flag should never be fastened, displayed, used, or stored in such a manner as to permit it to be easily torn, soiled, or damaged in any way.

(f)   The flag should never be used as a covering for a ceiling.

(g)   The flag should never have placed upon it, nor on any part of it, nor attached to it any mark, insignia, letter, word, figure, design, picture, or drawing of any nature.

(h)   The flag should never be used as a receptacle for receiving, holding, carrying, or delivering anything.

(i)   The flag should never be used for advertising purposes in any manner whatsoever. It should not be embroidered on such articles as cushions or handkerchiefs and the like, printed or otherwise impressed on paper napkins or boxes or anything that is designed for temporary use and discard. Advertising signs should not be fastened to a staff or halyard from which the flag is flown.

(j)   No part of the flag should ever be used as a costume or athletic uniform. However, a flag patch may be affixed to the uniform of military personnel, firemen, policemen, and members of patriotic organizations. The flag represents a living country and is itself considered a living thing. Therefore, the lapel flag pin being a replica, should be worn on the left lapel near the heart.

(k)   The flag, when it is in such condition that it is no longer a fitting emblem for display, should be destroyed in a dignified way, preferably by burning.

A Senate Report from 2008 provides an excellent summary of federal statutes and regulations.  However, there is no penalty for violation of the statute.  There are corresponding restrictions on the use of the American flag in the statutes of several of the states, some of which includes penalties. While these statutes are still on the books, they are of questionable enforceability, and one does not have to look very far to find the flag used on clothing (compare 4 USC § 8(d)), on costumes and uniforms (compare 4 USC § 8(j));  and in advertising (compare 4 USC § 8(i)).  The collection of U.S. Patents has several of these examples: 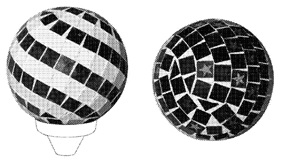 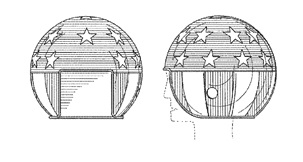 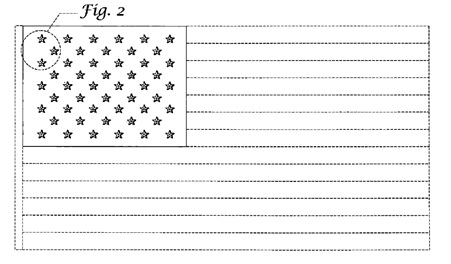 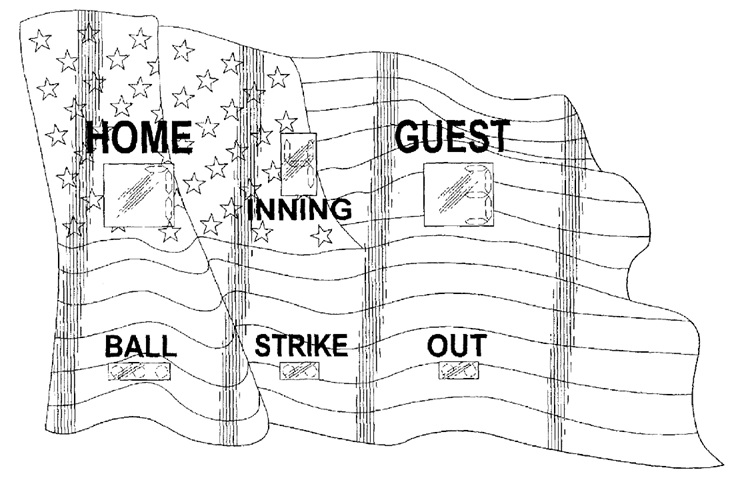 D585,775 Scoreboard in the Form of an American Flag 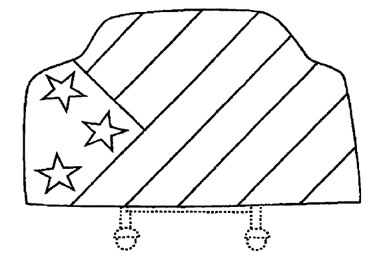 D549,032 American Flag Style Cover for Barbecue or the Like 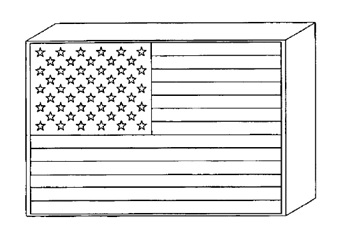 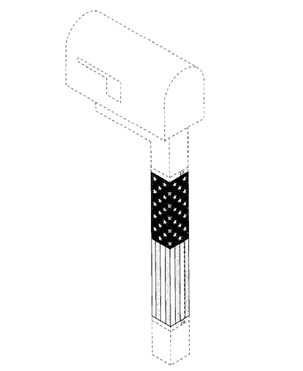 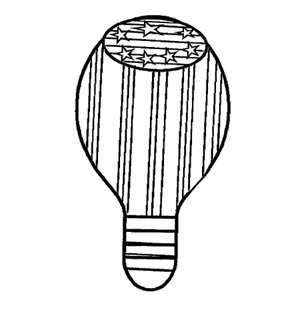 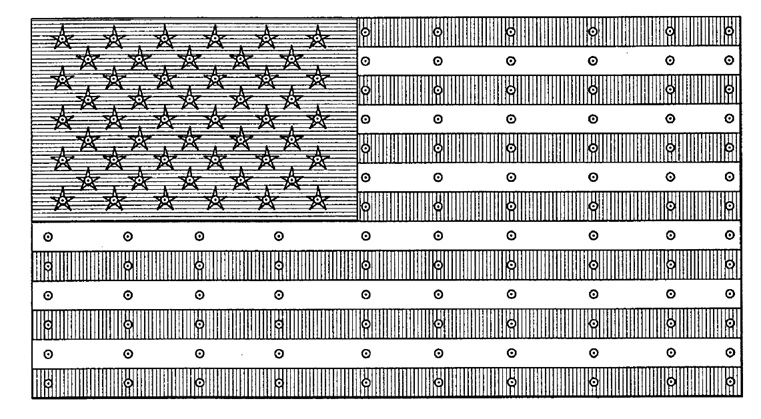 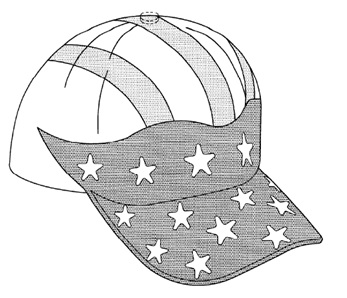 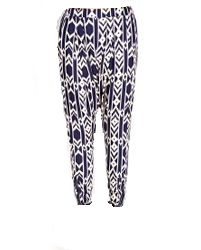 infringement, selling copies of Forever 21’s Ikat Harem Patent.  Nothing remarkable in the story so far, but was is remarkable that Forever 21 had the foresight to register the copyright in their Ikat pattern back in 2013.  Having a registration is usually a prerequisite to bringing an infringement action.  Furthermore, if the registration is obtained within five years of first publication, the certificate of a registration is prima facie evidence of the validity of the copyright and of the facts stated in the certificate. 17 U.S.C. §410(c).  Finally if the registrations is obtained before the infringement begins, a  prevailing copyright owner has access to an award of statutory damages and attorneys fees.  17 U.S.C. §412.

ASTM et al. v. Public Resource, Civil Action No. 13-cv-1215 (D.D.C Feb. 2, 2017) involved 257 of ASTM’s standards and the 1999 AERA standards that have been incorporated by reference into federal law.  Public Resource posted these standards on the internet.  ASTM sued for copyright and trademark infringement, and Public Resource counterclaimed for a declaration that its conduct did not violate copyright law or trademark law. The parties cross-moved for summary judgment.

At the heart of Public Resources Defendant’s defense is the argument that Plaintiffs’ standards lost their copyright protections the instant they were incorporated by reference into federal regulations.  The district court found that Congress has already passed on the question of revoking copyright protection for standards that have been incorporated by reference into regulations, and any further consideration of the issue must be left to Congress for amendment.  Specifically, the court looked to Section 105 of the Copyright Act, which states that “[c]opyright protection under this title is not available for any work of the United States Government.”  Section 101 defined a work of the United States Government as “a work prepared by an officer or employee of the United States Government as part of that person’s official duties.” The court concluded that:

These are the only government-related works that outright lack copyright under the law. For other types of works, such as those commissioned by the government or created under government contract by private parties, Congress chose to make case-by-case decisions and leave the determination of whether private copyright should exist to the federal agency that commissioned or contracted for the work.

Significant to the court was the fact that Congress was aware of the practice of incorporating standards by reference into regulations when it passed the current copyright law, but  made no mention of these incorporated works.  Moreover, the court noted that Congress has determined that online access to the nation’s laws and regulations need not be provided for no cost.

The court concluded that the situation invoves policy balancing that Congress is presumed to have already engaged in, and any further changes to the law in light of new technological developments and resulting changes in public expectations of access to information are best addressed by Congress, rather than this court.

Public Resource also raised due process requirements of access the text of “the law,” including the standards at issue here. The court noted taht four Circuit Courts have considered similar arguments regarding copyrighted works incorporated by reference into state and federal regulations.  The First, Second, Fifth, and Ninth each dealt with similar issues, with mixed results.  The court found that the ASTM standards have not entered the public domain upon their incorporation by reference into federal regulations and do not lose their copyright protection.